Schools are the learning temples. Pupils learn everything from their mini society, school. Science is an important subject for every grade. The subject science is meant for practicality, hands on experience. Teachers can give good explanation of the science experiment, but it is not 100% instruction until the child is taken to the laboratory to perform a live experiment. Do our schools (government) have science labs? 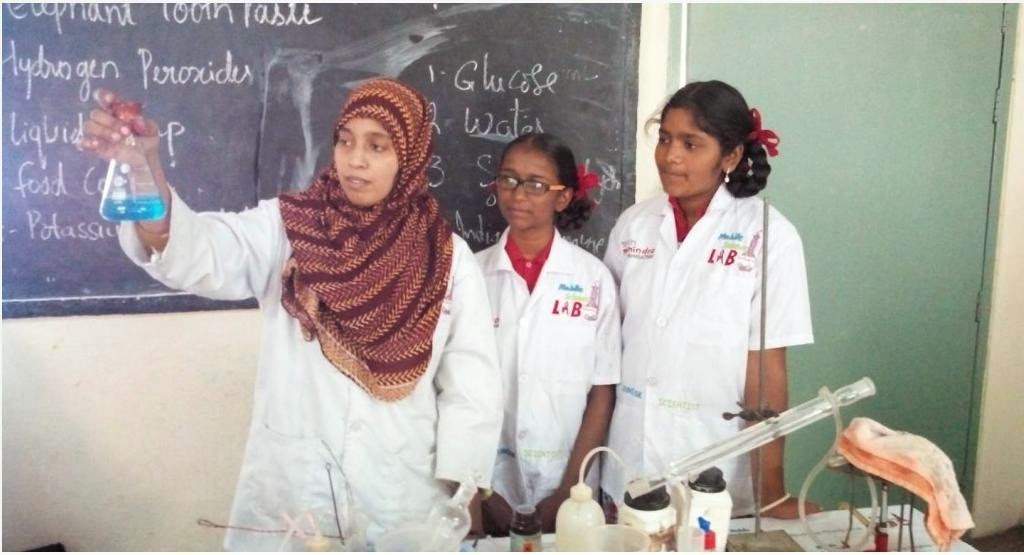 To my surprise I had seen a team of youngsters wearing aprons performing live experiments in 9th classroom at Govt. Girls High School Red Cross. The team is from Mobile Science Lab. They were carrying experiment kits related to chemistry, biology and physics. Pupils were excited to participate in executing the experiments, holding the glass jars with chemicals, watching the reactions live was much fun for them.
Mobile Science Lab (MSL) is an initiative of Sahayata Trust, supported by Tech Mahindra Foundation. MSL started in the year 2011, works for the quality science education in India. "Schools in Hyderabad, regardless private or government are running without science laboratories. Schools are busy inducing the syllabus to the little brains, how can they spare time for science experiments", says the founder of Mobile Science Lab, Mr. Lateef Atear. According to NKC (National Knowledge commission) majority of the employees prefer to work in multinational companies relating to IT industry, finance etc., People in India are hardly taking up research as their career. The problem starts at schools, as chalk & talk method do not create interest in the subjects like science. Science is a lively subject, experiments and field trips are the ways we can acquire the subject through. Unfortunately, our education system is concerned with cognitive skills with little or no importance given to the application.

Affording a science laboratory and maintaining it is not an easy task for every school. The solution is Mobile Science lab! The lab moves from school to school; educates the pupils in practicality of the subject.
MSL focuses on gaining knowledge through research. Scientific learning is tied directly to state learning standards (essential knowledge and skills) and is scheduled so that teachers have time to take up new concepts and design ways to transfer the essential concepts to their students on a regular basis.
MSL tied up with 18 government schools in Hyderabad. They make nine visits to each school in a particular academic year.  They shows live experiments in physics, chemistry, biology, astronomy etc. Startups like these nurture the little scientist in every student. Govt. should take up this initiative in a big scale, and ensure the service for more schools.

For more information about MSL visit: http://www.mobilesciencelab.in/
Posted by Unknown at 10:54 AM No comments:

The word ‘straight’ is associated with an important metaphor, and as a result gives us a number of useful expressions by Nilesh Jahagirdar
Straight dope
This is a slang, informal expression that refers to ‘unadulterated, complete truth or information.’ For example, you might say: ‘‘While most news channels cover entertainment more than actual news, i like this new channel because it gives me the straight dope.’ In usage, the expression is always preceded by the article ‘the.’ When you ask someone for ‘the straight dope,’ you are asking them to tell you the truth, complete and without any coverup.
Here is another example: ‘My father never tried to hide the harsh realities of the world from me. Whenever I asked him a question, he always gave me the straight dope.’
A straight arrow
Mostly used in American English, ‘straight arrow’ describes someone who is honest and straightforward. For example, you might say: ‘I hope my friends all describe me as a straight arrow, because I try to be honest and direct in all my interactions with them.’ Beyond honest and straightforward, ‘straight arrow’ also implies that someone is well-behaved, or careful about their behavior in social situations.
The role of the metaphor ‘straight’ should be clear in this context. Someone who is a straight arrow is predictable and reliable, and certainly the opposite of ‘devious’ or ‘crooked.’
Get something straight
In conversational English, this expression is particularly useful in a specific context. If a friend tells you something, and you want to confirm that you have understood her correctly, you can start your sentence with this expression.
Here is an example: ‘OK,so let me get this straight. You want me to go there in the morning to pick up your book?’ In terms of meaning, the expression essentially says ,‘please confirm this for me.’
However, the expression is particularly useful in situations where you paraphrase something someone has said, in such a way that you make it sound wrong, and thereby express your disagreement. Here is an example: ‘OK, so let me get this straight. You don’t want to use your credit card online because of security fears, but you are asking ME to use my credit card for you?’

This article was originally posted in The Hindu
Posted by Unknown at 3:54 PM No comments: