As part of the initial research for EFF, we went visiting a number of schools last year. One of the schools we went to was located in Janwada, near Hyderabad. We were interested in the high school, but we also spent some time at the primary school, which was just a few minutes away. My job for the day was to walk around and take pictures of the school and the children.

To say the conditions in the school were deplorable would be an understatement. In terms of facilities, this is what the schools offered:
There wasn’t much more, actually.

Here are a few pictures. 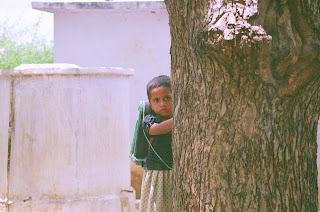 At least there WAS a school, you’d say. But the list above was easy to make. A much more difficult list to make is that of the things the school did not have. What DID the school lack? The answer would depend on what you think a school should have. To my knowledge that hasn’t been clearly stated anywhere. Not by the policy makers, nor by an NGO or group that is concerned with the field of education. “Schools should have all the amenities” is the sort of vague claim we are used to hearing.

But let me see if I can put things in a little perspective here.

My sister’s little son very recently turned three, and started attending school, preschool is a more appropriate term here, I suppose. He is in Mumbai, and, although initially apprehensive about going to school, loves it now that he’s started.

There’s a good reason for it. The school is safe, comfortable, and fun. There are beds for the little kids in case they happen to doze off, lunch is provided by the school and so is drinking water; all children carry ID cards with school phone number; and every week there are movies and programs shown in a specially designed hall which looks exactly like a real movie theatre, except that everything is on a smaller scale.

I hardly need to add that the school also has a library, toys, classrooms and teachers, playground, the works.

I’m not suggesting that all government schools need to be equipped with all this too. I know we probably don’t have the resources to provide such facilities in our schools just at present.

But the question is, how far are we willing to lower our standards? Recent efforts, such as The Sarva Shiksha Abhiyan has maybe increased the number of schools, but the whole project has done little to improve the quality of education. In fact, in a way, the project has been seriously damaging. Where there was no school, people and the media could focus on the lack of educational facilities. Now that the schools are there, such protests, and their intensity, would go down--regardless of whether there is any education happening at all.

In the meantime, the gap between the government schools where the poor and the rural children, and the urban private schools, will keep widening. For some reason, the situation is not considered shocking. It is in fact just accepted by the government that implements this policy as well as the people whose lives are made--and unmade-by this situation. The urban, affluent people who continue to be unaffected by this situation, and perhaps no motive to react anyway. As a nation, we seem to say that if a child is born in a remote place, or a small village, then she cannot expect to have access to a good library. If a child’s parents are poor, or not very well-off, then she cannot expect to have safe drinking water at school.

Before they’ve had the opportunity to even comprehend the world around them, our children are sorted into important and unimportant, and this is somehow normal and acceptable. And what we, as a nation, offer these children is based entirely on what sort of money they have, what the gender is, or even what the social status is, whether on the basis of caste, or financial condition.

At the Janwada school, I approached an empty classroom--there were schoolbags neatly arranged in rows on the floor, but the kids were out for recess. There was one little boy in there though--it looked like he’d just run in to fetch something from his bag, and he was now running out to join the other kids. As I stepped in, he nearly ran into me, stopped, and broke into a huge, ear-to-ear smile.

The only reason this boy, and millions like him, are not getting a good education is because we have learned to pretend, somehow, that the poor or the deprived somehow deserve less.

We need to be educated about what education is--and needs--in the first place, and also realize what we need in terms of resources and effort to achieve this. Forget the air-conditioned, soundproof auditorium but let us remember that every school that today goes without a library or clean drinking water is in fact a compromise of the worst kind, a disastrous situation that needs to be corrected as soon as possible--the lives of a few hundred children depend on this every year, per school.

We’ll tolerate the situation--for the time being--since we must. But nothing gives us the right to accept it. Initiatives such as Education for Free are the result of a simple refusal to accept the condition Indian education system is in, the implicit discrimination, and the incredible tragedy that surrounds us and wait endlessly for someone to come along and fix it.
Posted by the grebulon at 4:44 PM No comments: