Here’s a little something for all the teachers out there....SBI (State Bank of India) has a special scheme called “Teacher- Plus”. They offer minimized interest rate when you take loans from the bank. isn't that nice? If you have plans to apply for a loan, you could check this out. This is what they have to say:

SBI recognizes the special position sanctioned for teachers in our society and is proud to introduce Teacher Plus - a special scheme for teachers placed under State and Central Governments as also under the deemed universities. Through Teacher Plus, you can avail of concessions in the rates of interest, processing charges and margin amounts in the following schemes:

Get the details from here.

P.S: When you click the 'apply now' button, it takes you to the 'report a complain' page. It’ll be more helpful if you contact your nearest SBI branch.
Posted by Among at 6:23 PM No comments:

After I wrote about Akshaya Patra Foundation and their efforts in using technology to prepare and provide hygienic food, I searched Google images for the machines--the conveyor, industrial steam boilers, bucket elevators, and material handling systems etc they have mentioned just to get a feel of it, but couldn’t find any. This morning I searched in Youtube and viola! I found some amazing videos. I share one of them here. Their effort is awesome ! And btw, the sambhar totally looks yum! :)
Check it out...

Just a couple of days back, teachers’ day was celebrated in . And every year esp. on this day, I think of my teachers who taught me the best way they could. But I seldom wish them…the last time I did was ten years back. There are five of them, three --who taught me in my primary school and the other two in high school. This year something told me that I need to thank them for what they have done over the years…moulding hundreds of students year after year. I was up early and dialed the numbers one after the other….I heard them and believe me they were overjoyed! Ex students hardly wish their teachers you see.

My primary math teacher-- my favorite, who taught me arithmetic, because of whom I had fun with numbers, the utmost pleasure of calculating... however, is no longer a teacher. He told me that he is suffering from throat cancer and will not be able to teach any more. I was saddened by the news—sorry for the many students who will not be able to experience the joy of learning from him. Nevertheless, he has done his job and did it so well.

Until now I had only been aware of people using technology to harness education, EFF being one. But here is Akshaya Patra Foundation using technology to prepare and supply hot (nothing to do with spice) nutritious, quality, hygienic food, to feed thousands of hungry children and thereby bringing them to school and keeping them. It is interesting to note that they have been using industrial steam boilers, bucket elevators, conveyor & material handling systems, and other industrial processes in the kitchens to prepare the meals.
Check out their website
Posted by Among at 7:51 PM No comments:

Things I learn as I teach--to teach better 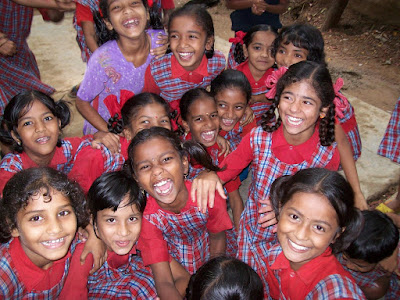 ICICI has also joined in the effort to work towards educating the uneducated millions in . “Read to lead” is the program which for now will cover the states of Andhra Pradesh, Bihar, Karnataka, Rajasthan, Madhya Pradesh, , Orissa, Uttar Pradesh and Tamil Nadu.
Posted by Among at 7:42 PM 1 comment:

“The crumbling schools” and the political apathy

I’ve been following the US elections fairly closely this time around. I’ve always kept track of them, but it was just as part of catching the daily news on TV. This time, though, I find myself actually seeking more information, reading not just the headlines, but also some analytical articles, and much more detailed news.

It’s partly because I’ve started to admire Obama’s oratory skills, and enjoy the way he uses rhetoric effectively. What has impressed me most is the way, regardless of who the candidate is or what the party is, education is one of the key concerns that everyone tries to address.

For example, in a major speech titled “a more perfect union” Obama declared:


At this moment, in this election, we can come together and say, "Not this time." This time we want to talk about the crumbling schools that are stealing the future of black children and white children and Asian children and Hispanic children and Native American children. This time we want to reject the cynicism that tells us that these kids can't learn; that those kids who don't look like us are somebody else's problem. The children of America are not those kids, they are our kids, and we will not let them fall behind in a 21st century economy. Not this time.

Don’t you just love the rhetoric--measured, rhythmic phrases all balanced together? Obama has some concrete plans too--check the section dedicated to education.

Which brings me to my point: I’m no expert, but I’ve always taken a reasonable amount of interest in Indian politics and Indian elections. And I honestly cannot recall, off-hand, a single instance where education was part of any election agenda or any political debate surrounding an election. I wonder if this has happened at all.

Off the top of my head, I can think of religion, caste, taxes and subsidies and reservations, linguistic identities, and regional identities as the issues that dominate our elections. I know it’s easy enough to say something like “We Indians don’t have that maturity yet,” and explain away why our elections are never about our schools and our children, but why DON’T we have the maturity? Why do we really never ask about drop-out rates and about schools without classrooms when electing our representatives?

The situation is genuinely surprising, because Indian parents typically spend most of their energy and time trying to ensure a better life for their children. It is hard to think of another goal that an average Indian couple aspires to as strongly.

And that's why I’m puzzled. At the personal, domestic level, everything is about--and for--the children. But the public, political part of our lives is solely an adult world where children are not even a presence, let alone a minor one.

There must be some way of ensuring that even the political, social processes we are involved in begin to address the needs of our children, and not just of us adults. Some way of making sure everyone realizes that while as individuals we can do a lot for our children, as a nation working together, we could do a lot more for all the children, and not just our own. And that we need to speak up, and talk about the problems our children face and what we want for them, and then elect someone who is willing to do something about it.
Posted by the grebulon at 4:11 PM 1 comment:

Sashi Tharoor on eductaion in India

Just a few days before Teachers’ day, I came across Sashi Tharoor’s article “Let’s groom teachers of tomorrow” in the Times of India. Succinctly written, intense, urgent, and genuine. I can’t agree more with him. It’s one of those articles of which I take a print out, laminate and neatly store in my article collection box. I know with technology there are many convenient ways of storing such things, but it’s just an old habit that refuses to die. Here are some excerpts from the article:

UNESCO defines an illiterate person as one who cannot, with understanding, both read and write a short, simple statement on their everyday life. By that definition, i fear that fewer than half our population would really qualify as literate

Happy teachers’ day to all the teachers out there…this is the day to honor you for all that you have done to educate the nation. Today, as you receive flowers, presents, cards and hugs remember that “a better tomorrow” is in your hands. Teach in a way that our children not only listen but also learn and grow up to be responsible citizens.

Over a relaxed weekend, I came across this article by Rushi Bakshi in The Hindu. Certainly worth a read. As you’ll see, Rushi makes an excellent, nearly exhaustive list of all the problems that plague the educational in India. Everything we’ve been telling people for a year—from lack of teachers to unhygienic schools to boring, colorless textbooks—Rushi mentions it all.

The similarity is striking. But then again, not quite. Rushi is recommending the satellite route to cure many of the ills—set up the hardware in rural schools, and beam quality content via satellite.

While I do not doubt that such an arrangement will benefit students, I’m not sure to what extent it will fix the problems we face. After all, good education can only be facilitated only in an environment where there is open interaction between teachers and students, and where students participate in their education, rather than just “undergo” it.

I suppose satellite can allow two-way interaction too, but I doubt if that will be financially viable in terms of equipment required, as well as in terms of scale.

On the other hand, using the Internet to achieve the result is far more practical and cost-effective. And with Internet spreading into various corners of the country at a dramatic rate, more and more schools—and children—are in a position to benefit from the Education For Free initiative every year.
Posted by the grebulon at 10:20 PM 1 comment: