Sneak peak of a primary school

I went on a holiday to my husband’s home town. It’s a remote village at Komorole Mandal, Prakasham District, in A.P. There are around 70 to 80 houses in that village. The unique thing in this hamlet is, all are Muslim families. You can't see any other religion except Islam in this village. 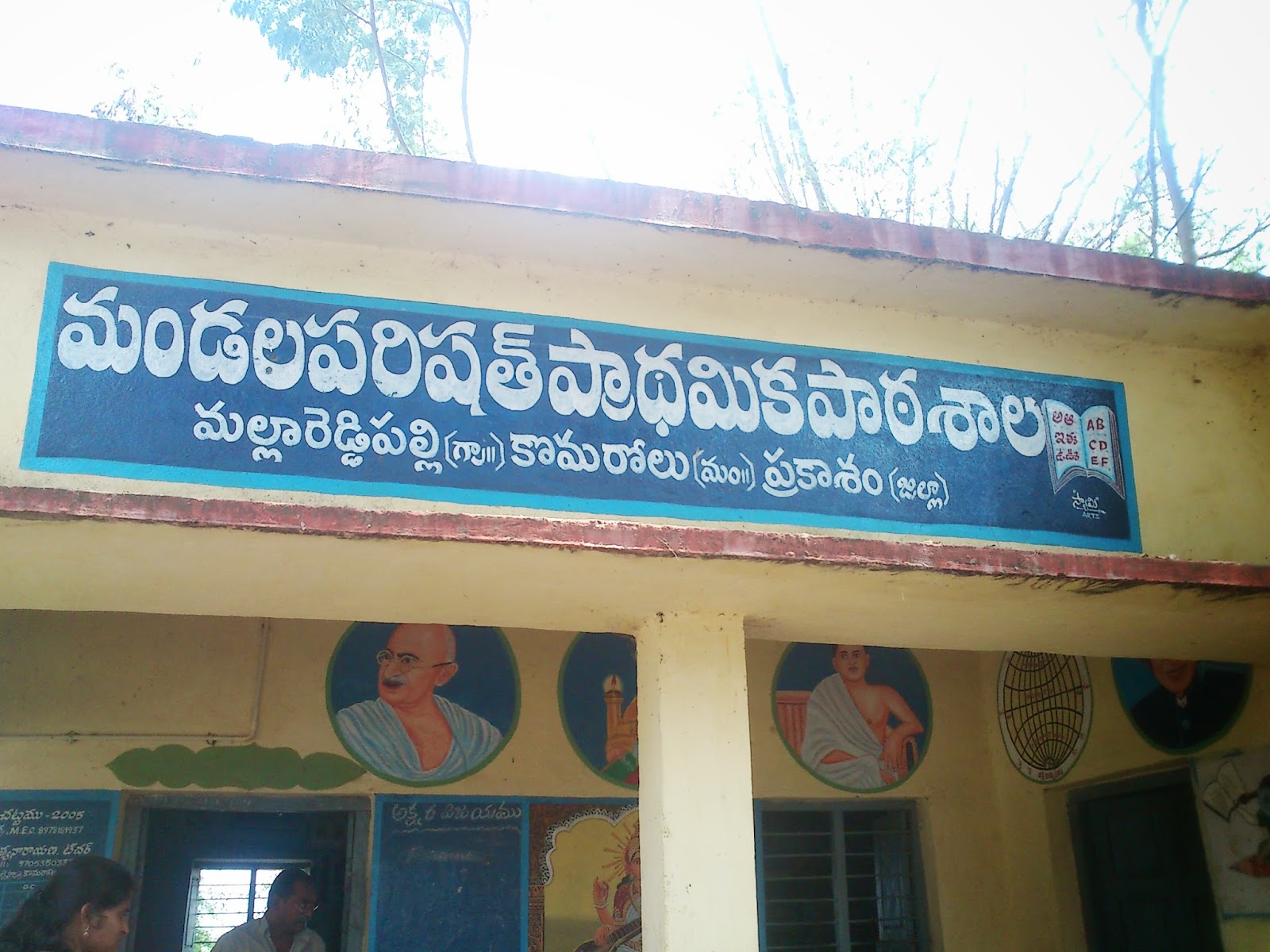 Daily I used to see some guys hanging out at a place. It was govt. Primary School. The guys sit on the compound wall of the school to chit-chat, it's like a time pass center for them. 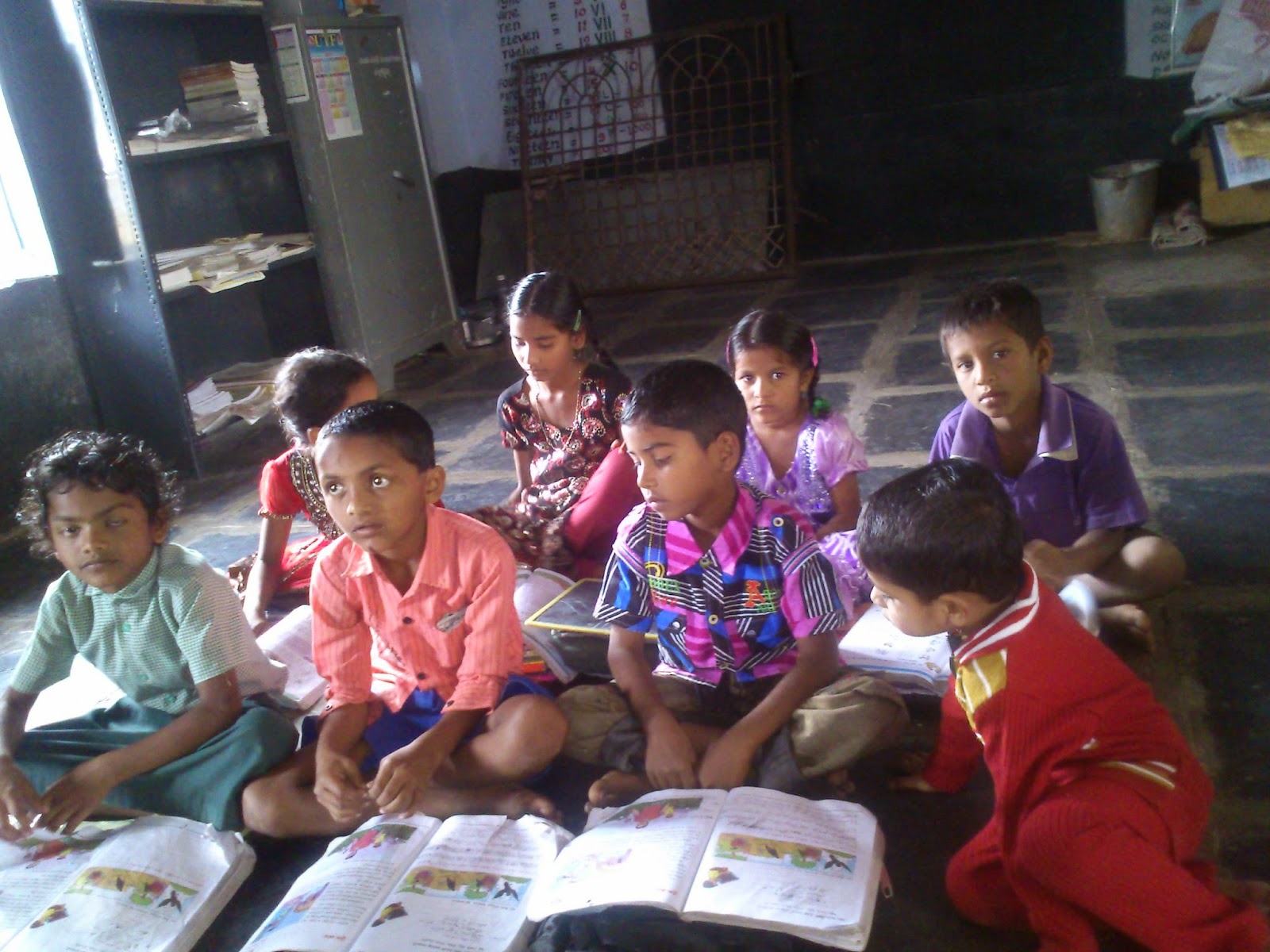 I peeped into the school on a fine day. The total strength of the school was 10 pupils; they included 1st to 4th standard students. It was Saturday, and the strength on that day was just seven (out of ten). All the four classes have to sit together in a single room. And its a single teacher school. 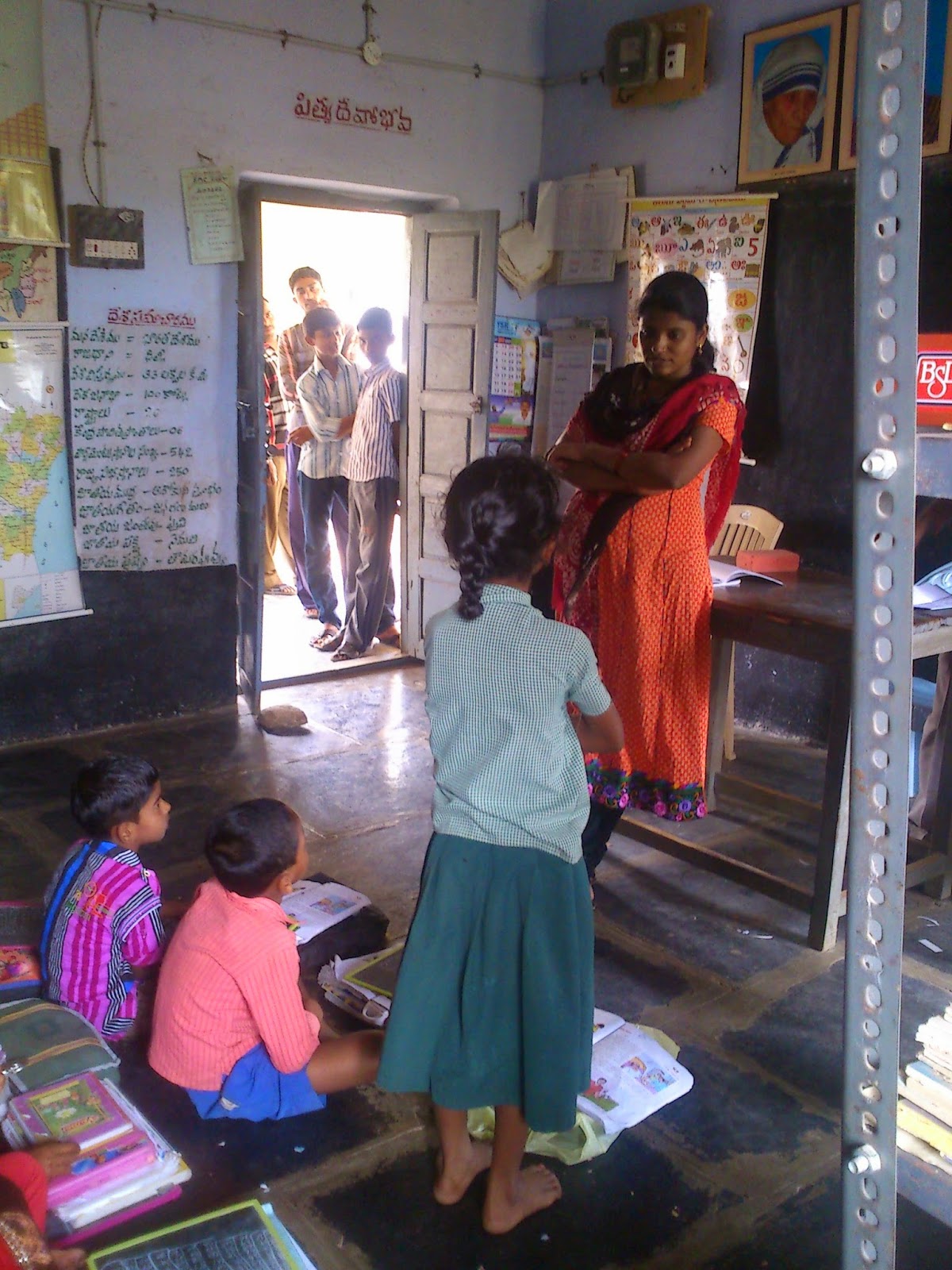 I got to spend some time with the pupils in the class. I interacted with the kids through some games and activities.
First I conducted a vocabulary game in their native language. It was not going good with their vocabulary knowledge.
Then I tried a simple game, recognizing colors. Hardly, one or two pupils named the colors I displayed. But when asked for examples for the color I displayed, they gave plenty of examples.
I started rewarding the pupils with chocolates for correct answers to boost their enthusiasm.

Basically, the students in the school are Muslims, they speak a kind of Urdu in their homes. But at school, they were taught in Telugu medium. For an average student it takes one year to learn the alphabets of the target language. The school teacher is concentrating only on alphabets the whole year for all the four standards. 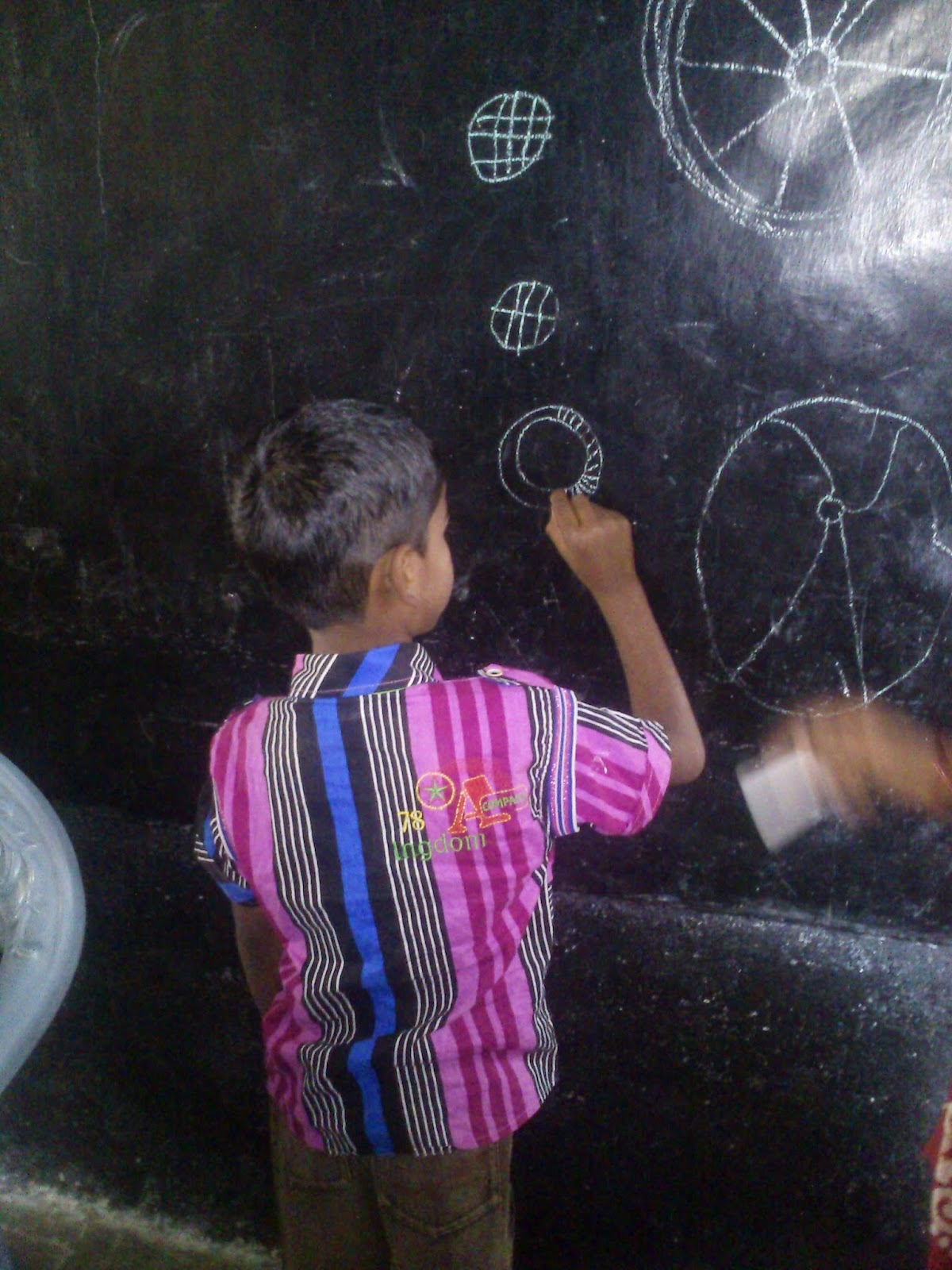 Asad Wali, Std I, drawing model of bangle, an example of circle shape. 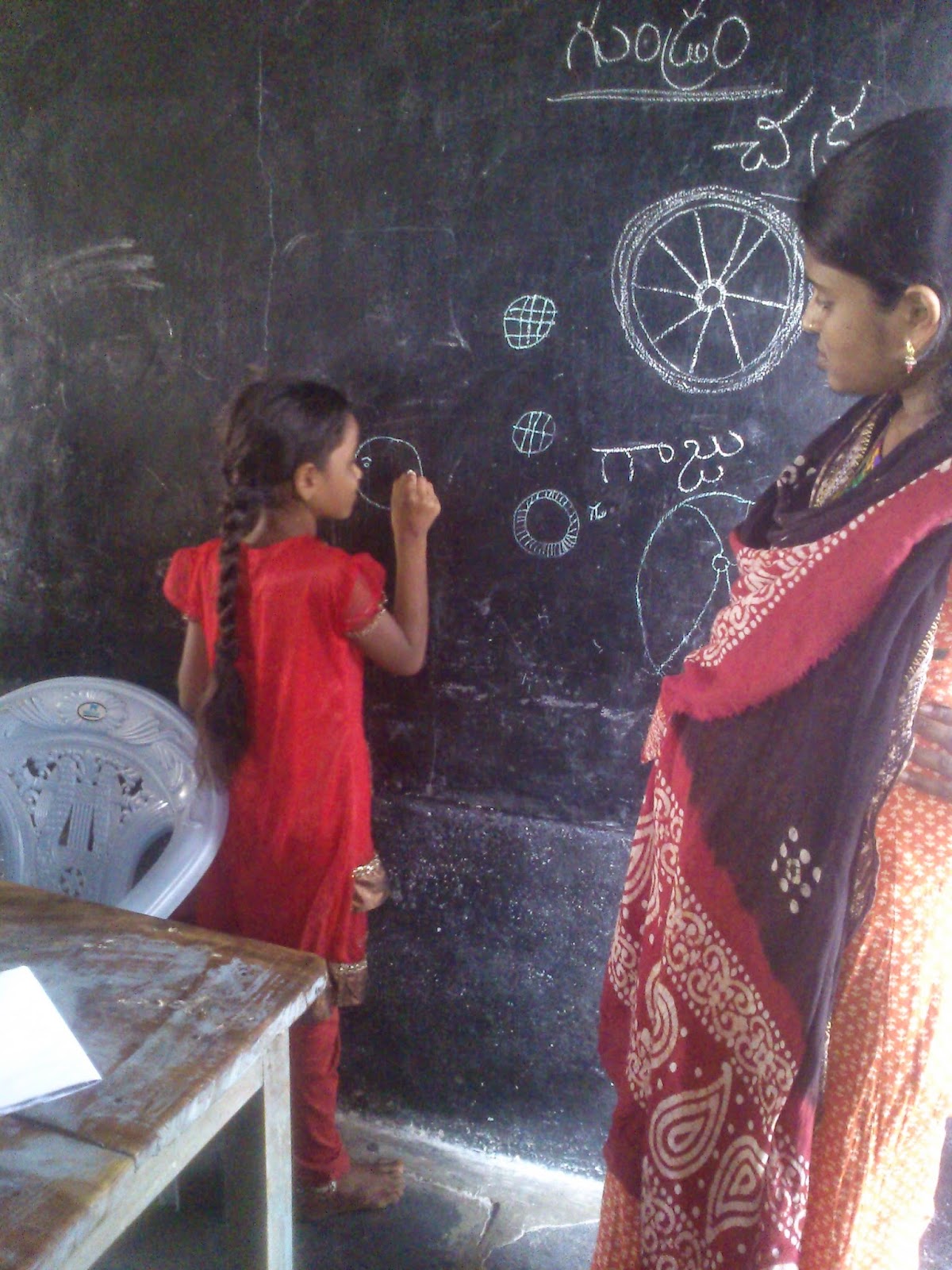 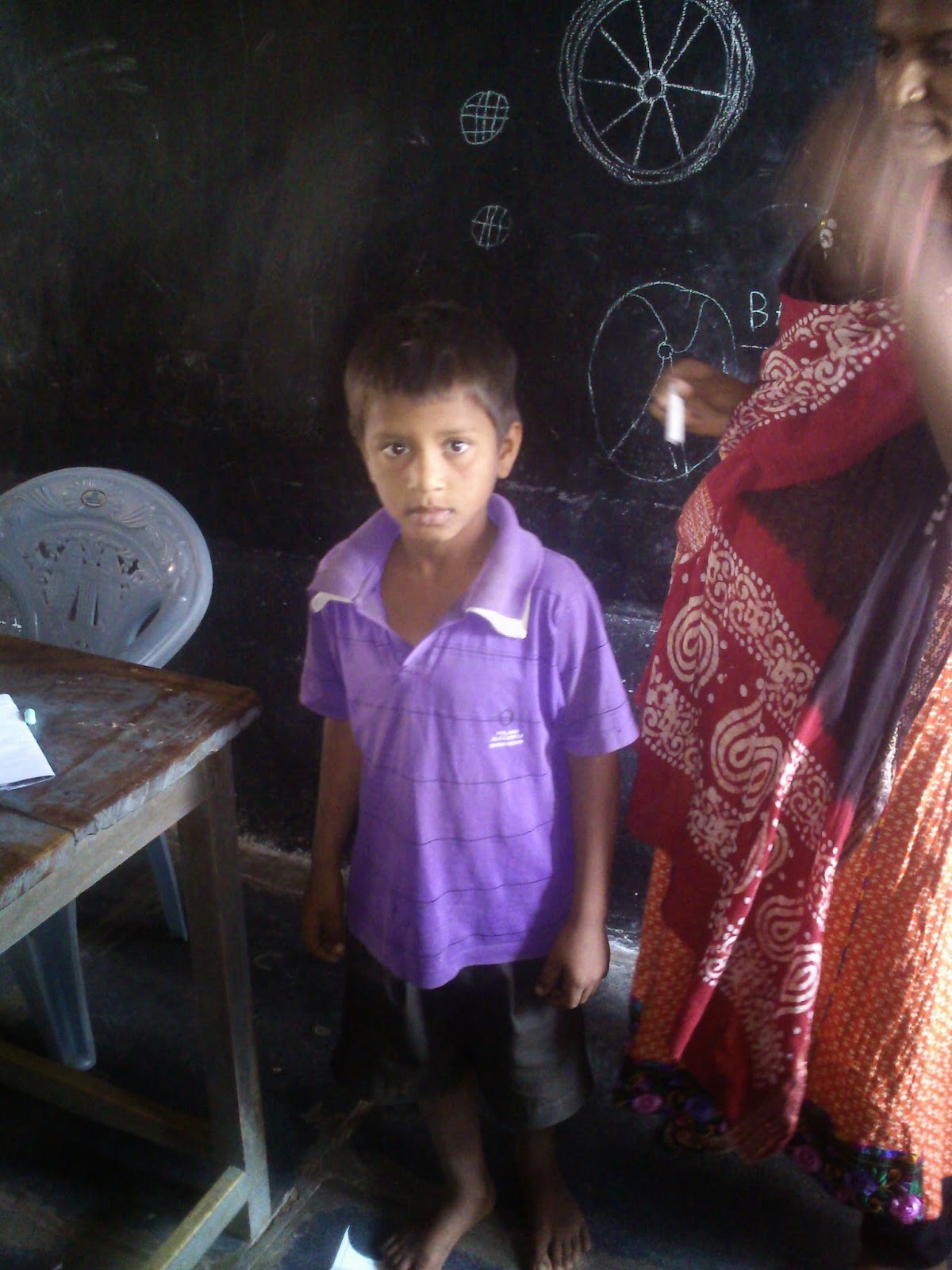 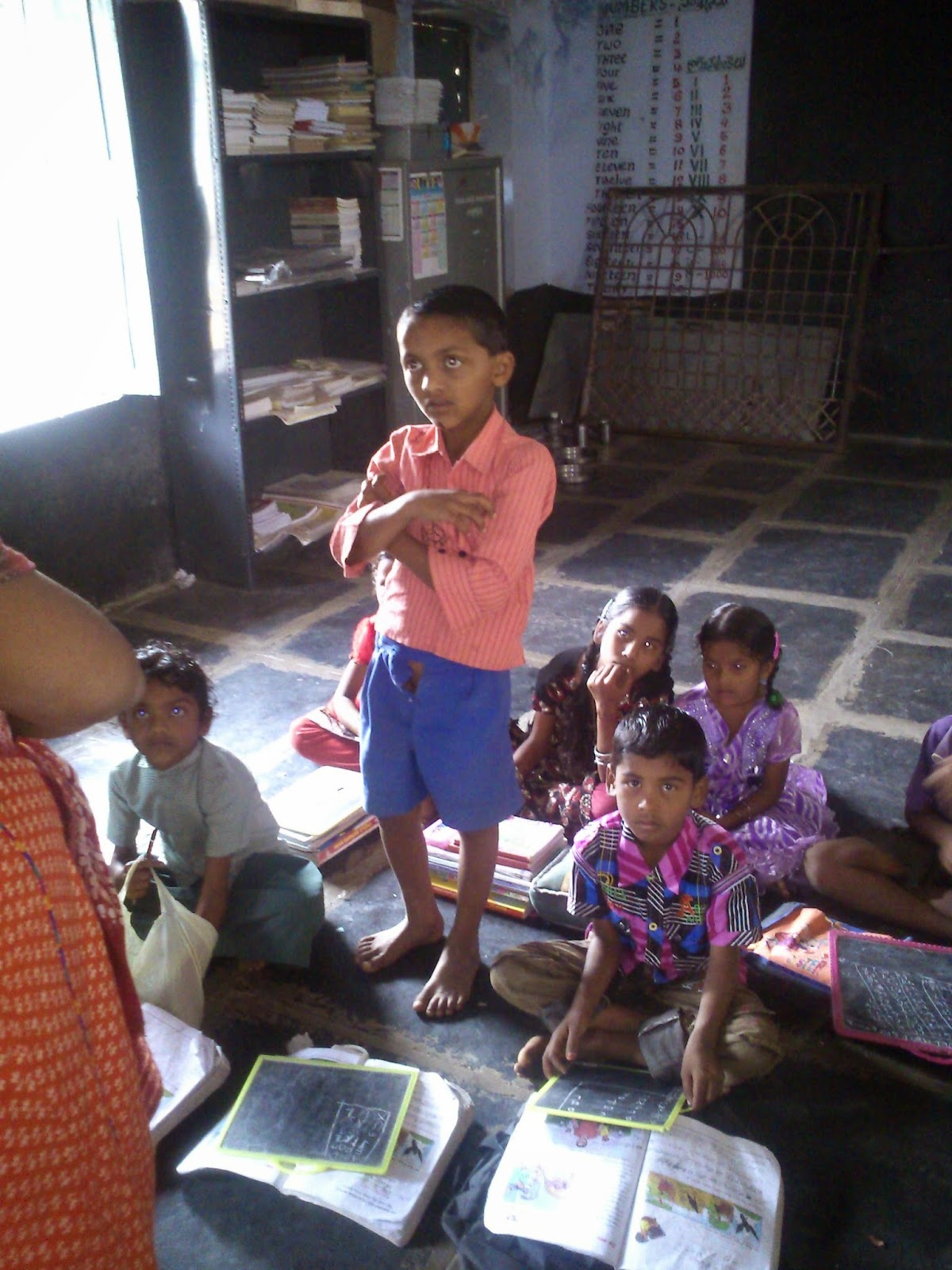 From left, Jilani, Std III. He is good and active in studies. But lack of cleanliness, he takes bath or changes his dress once in two weeks.From right, Rasool Std III, he can't speak properly, tongue twisting issue.
"I never beat my students, if I do so pupils will drop out. Earlier the strength in the school was 18 to 20 pupils. But now, it got reduced to 10 pupils. Teachers won't get interest to teach less strength. Even though I am trying my best to teach them"
"Parents in the village are not willing to send their kids to government schools. As a result, private schools are popping up in every village.Now a days, parents are leaned to English medium schools than native language schools. Hence government schools are becoming empty." explained the school teacher, Mr.Satyanarayana, when asked the reason for depleting strength.

There are so many government schools in the states of Telangana and A.P. running with less than 10 pupils in a school. The new government has decided to shut down the schools with less than 20 pupils and merge these school to near by schools. According to the the present records there are around 2000 schools in the state of Telangana come under this category which are going to shut down in this academic year. 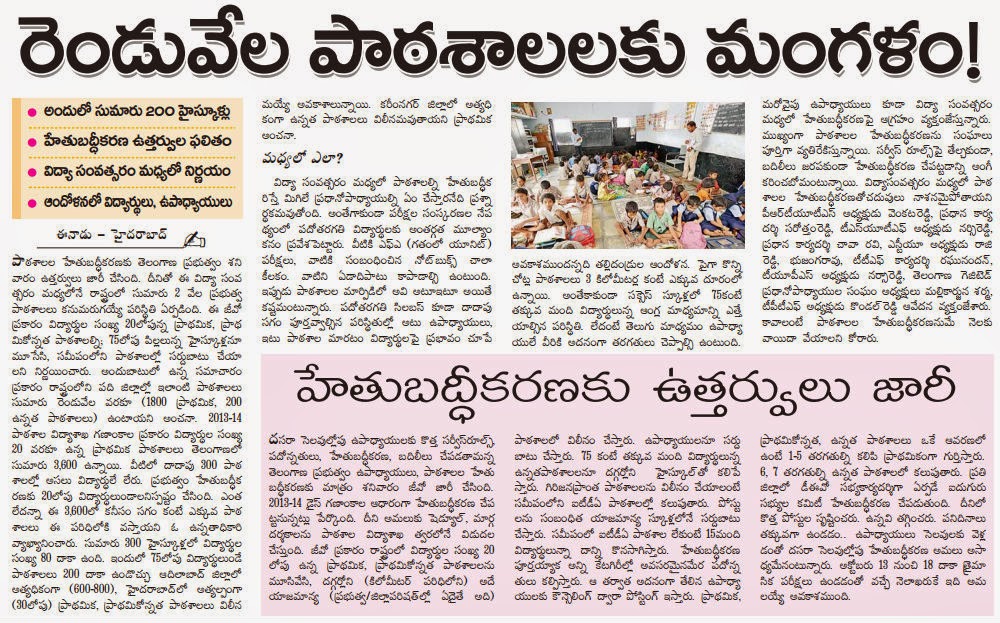 A teacher tap the fertile mind of young children 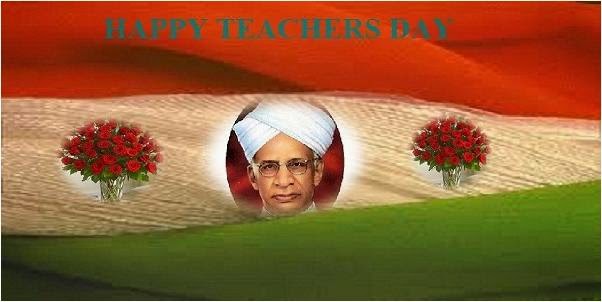 Teacher's day is celebrated on 5th September every year throughout the country. On this day we gratefully remember Dr.Sarvapalli Radhakrishna, who believed that "Teachers should be the best minds in the country". Along with  being a great teacher, he was also the president of India, a stanch believer of education and was the well known diplomat and a scholar.
The word teacher in Sanskrit is "GURU". "GU" means the darkness and "RU" the remover of darkness. Hence, a teacher is called a torchbearer. Teaching is not a job, but a noble calling. A teacher is a source of information a guide, a mentor,  motivator and above all they are the back bone for our country. 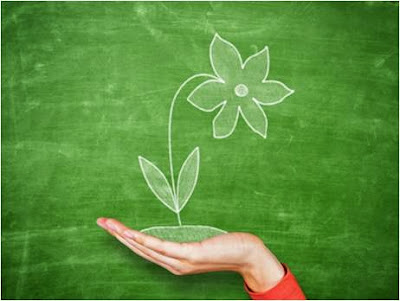 Teacher is the essence of education and it is only through their guidance we are accomplished in our field today. The first teachers are our parents: they teach us, care for us and nurture us to be capable people. Our parents meet all our physical needs but teachers motivate us with the  light of knowledge and remove the ignorance. Above all life is the biggest teacher.
Teachers are the pillars of our success: therefore let us salute all our teachers who have become beacon of light, guiding us throughout the journey of life.

source: http://www.saidarshan.org/baba/docs/realguru.html
Posted by Being different is wonderful at 5:17 PM No comments: